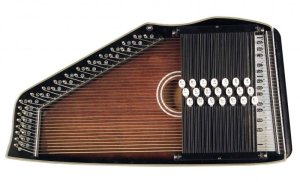 Ever since myfirst semester of music therapy coursework, I did not find the autoharp very useful. I figured, I can play the guitar, I prefer the guitar, therefore i have no use for the autoharp. However now that I am in an internship in Neurologic Music Therapy. I see a the the autoharp in a whole new light.

If I have learned anything about Sensorimotor Movement in my internship it is that you want the music to do the work in driving the movement.The music should tell the body what to do. For the music to reflect a movement like shoulder rotations (such as swinging the arms above the head)  the music should simulate a rolling motion, such as the sound that you would hear if you were to strum every string of the autoharp. The autoharp having 36-48 strings,  which allows for large rolling movements such as hip flexion’s (swinging your leg as sing in the following video) and shoulder rotations (mentioned above).   (*Disclosure, I am not belittling the guitar with it’s 6 strings. The guitar can still be played with the intention of inspiring movement)

Below you will find definitions of the two Sensorimotor NMT techniques that I have become familiar with over the last 5 months of internship.

Patterned Sensory Enhancement (PSE) is a technique which uses the rhythmic, melodic, harmonic and dynamic-acoustical elements of music to provide temporal, spatial, and force cues for movements which reflect functional exercises and activities of daily living. PSE  is (a) applied to movements that are not rhythmical by nature (e.g., most arm and hand movements, functional movement sequences such as dressing or sit-to-stand transfers) and (b) it provides more than just temporal cues. PSE uses musical patterns to assemble single, discrete motions (e.g., arm and hand movements during reaching and grasping), into functional movement patterns and sequences. PSE cues movements temporally, spatially, and dynamically during training exercises (Thaut et al. 1991).

Therapeutic Instrumental Music Performance (TIMP) is the playing of musical instruments in order to exercise and stimulate functional movement patterns. Appropriate musical instruments are selected in a therapeutically meaningful way in order to emphasize range of motion, endurance, strength, functional hand movements, finger dexterity, and limb coordination (Elliot 1982, Clark and Chadwick, 1980). During TIMP, instruments are not typically played in the traditional manner, but are placed in different locations to facilitate practice of the desired functional movements (Thaut 2005). Speech and Language Rehabilitation